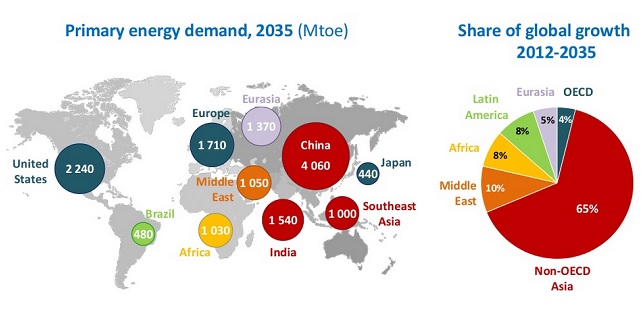 energy security36
Triple-digit prices for crude oil have opened up large new unconventional sources like Canada’s oil sands. But “this does not mean the world is...

Triple-digit prices for crude oil have opened up large new unconventional sources like Canada’s oil sands. But “this does not mean the world is on the verge of an era of oil abundance,” according to the International Energy Agency (IEA).

At the same time, the global demand for energy will keep rising — jumping by one-third by 2035, the IEA reports in its latest World Energy Outlook 2013 (WEO 2013).

Low-carbon energy sources will be able to meet around 40 percent of that growth. But another option policy-makers need to explore further is energy efficiency.

Unless market barriers can be overcome, two-thirds of the economic potential for energy efficiency will remain untapped by 2035. One such barrier, the IEA finds, is “the pervasive nature of fossil-fuel subsidies, which incentivize wasteful consumption at a cost of $544 billion in 2012.”

She continued, “It is now more than five years after the onset of the global financial crisis, yet the recovery remains fragile; for many consumers and businesses, energy prices remain stubbornly high. Alarmingly, oil prices have averaged over $110/barrel since 2011. Such a sustained period of high oil prices is without parallel.”

Van der Hoeven then added, “Security, sustainability, and economic prosperity – this is the classic ‘energy trilemma’ that we face.”