energy153
Here’s another bit of data that might need tracking in a changing energy market: tradable energy quotas, or, another way to describe them, electronic... 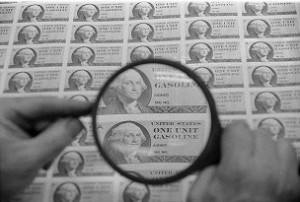 Here’s another bit of data that might need tracking in a changing energy market: tradable energy quotas, or, another way to describe them, electronic rationing units for energy.

Faced with increasingly tighter oil supplies as well as pressure to reduce carbon emissions, the UK needs to have plans in place to ensure everyone fair access to energy for essential uses, says the House of Commons’ All Party Parliamentary Group on Peak Oil. The best way to do that is to adopt a tradable energy quotas (TEQs) system, the group recommends.

Under such a system, every adult would be issued a certain number of TEQs units per year, with allotments declining in a controlled way year over year to gradually bring down fossil fuel use and carbon emissions. TEQs units would also be sold on the market like Treasury bills or government debt. That way, people who use less energy than they’ve been allotted could sell their extra TEQs units on the market for cash, and those who need a bit more energy could pay for additional units.

While the system might sound complicated, it shouldn’t really be hard to manage, according to the group’s latest report, “Tradable Energy Quotas: A Policy Framework for Peak Oil and Climate Change.”

“(T)he surrender of TEQs units takes place along with the money payment, as part of the same transaction,” the report states. “This is a system with low levels of noise and administration, leaving people to concentrate on the challenge of living within the steep descent in the availability of fossil fuels.”

What the system would do, though, is provide people, communities and companies with an incentive to develop local, renewable sources of energy, as well as more sustainable forms of transport, food production, waste management and other services. Coupled with the government’s planned universal rollout of smart electricity meters, TEQs could prove an eye-opener for energy users, giving new visibility into consumption habits … and new insights into why they need to change.

“During the era of cheap energy and confident growth, the participation of individuals in deliberation about how to serve the community, and how to build the institutions they wanted, was not seen to be necessary: experts were there to decide; consumers were there to consume,” the report states. “But in the new era of the energy transition, it will be needed again.”