geoengineering9
The Iceland volcano that’s putting a halt to so much European air travel might not have as much of an impact on carbon dioxide... 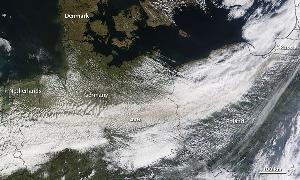 The Iceland volcano that’s putting a halt to so much European air travel might not have as much of an impact on carbon dioxide emissions and climate … for now.

As this fascinating graphic from Information is Beautiful indicates, the amount of carbon being spewed out by Eyjafjallajökull is minuscule compared to the average daily emissions from aviation in Europe. However, because its ash plume has grounded so many flights, the volcano is actually having a net negative impact on the continent’s total carbon emissions.

On the other hand, we might not have much reason to hope the volcanic eruption will create a bit of natural geoengineering to tamp down rising global temperatures. As Weather Underground meteorologist Jeff Masters explains, Eyjafjallajökull isn’t likely to rival Tambora (which led to the “Year Without a Summer”) or even Mt. Pinatubo in its climatic impact. That’s because volcanoes near the poles aren’t able to shoot nearly as much sunlight-blocking sulphur aerosols into the stratosphere as tropic-latitude volcanoes are, thanks to atmospheric circulation patterns.

Iceland, though, might be on its way to an increasingly ashy and shaky couple of decades. New Scientist quotes University of Edinburgh volcano expert Thorvaldur Thordarson as saying that the island nation might be entering a more active phase of volcanic activity, which appears to follow a cycle of between 50 and 80 years.

Or maybe this too is a symptom of climate change? As we reported last year, there are a good number of geologists in the world who find reason to believe that a warmer planet is also a more geologically active one. It does seem like we’ve experienced an awful lot of earthquakes lately, doesn’t it?

Actually, no. Just this week, the US Geological Survey sent out a press release with the headline, “Is Recent Earthquake Activity Unusual? Scientists Say No.” Based on historical patterns, the agency said, this year’s spate of temblors is actually still well within the normal range.