What parts of the world get the most sunlight?

solar energy96
What parts of the world have the best potential for solar energy developments? Desert regions like the Sahara and Death Valley seem like obvious... 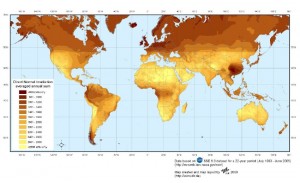 What parts of the world have the best potential for solar energy developments? Desert regions like the Sahara and Death Valley seem like obvious locales, but they’re not the only places on Earth to receive a wealth of sunlight.

Scientists and engineers use a measure of “direct normal irradiation” (DNI, also called “direct insolation” or “direct solar irradiance”) to assess a region’s potential for generating energy through photovoltaics or concentrating solar power (CSP). DNI is that portion of sunlight that directly strikes the Earth’s surface after absorption and scattering losses in the atmosphere, and is measured in kilowatt-hours per square meter per year (kWh/m²/y).

And what parts of the world have the highest levels of DNI? A 2009 study by the German Aerospace Center on the “Global Potential of Concentrating Solar Power” identified the areas with the greatest potential after eliminating developed or protected spots like settlements, airports, oil and gas fields, farms, swamps and bodies of water.

“The analysis shows that most world regions except Canada, Japan, Russia and South Korea have significant potential areas for CSP at an annual solar irradiance higher than 2000 kWh/m²/y,” write the study’s authors, Franz Trieb, Christoph Schillings, Marlene O’Sullivan, Thomas Pregger and Carsten Hoyer-Klick. “Africa, Australia and the Middle East have the largest potential areas, followed by China and Central (and) South America.”

How significant is “significant”? Following are the researchers’ calculations for how much open land in each region receives incoming solar energy of more than 2,000 kWh/m²/y:

Developed to its fullest potential, concentrating solar power could generate almost three million terrawatt-hours per year (TWh/y) … “a number considerably larger than the present world electricity consumption of 18,000 TWh/y,” the researchers noted. “While the costs of such systems are still high today, they can become a competitive option of electricity supply in the medium term, if an optimistic/realistic expansion of this technology — which can already be perceived today — takes place.”