energy153
Contrary to what all the flak it gets from political critics suggests, the US Department of Energy (DOE) does not, in fact, spend most... 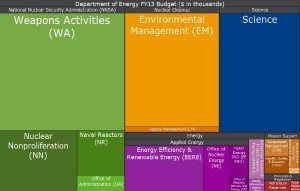 Contrary to what all the flak it gets from political critics suggests, the US Department of Energy (DOE) does not, in fact, spend most of its money on so-called solar debacles or electric-powered luxury cars. Much of its spending — more than 40 percent in its proposed budget for 2013 — is focused on nuclear weapons, nuclear non-proliferation and naval reactors.

Its latest $27.2 billion budget request, in fact, places a new bet on nuclear energy, too: $770 million, including $65 million to research small, modular reactors and $60 million for nuclear waste research and development. That wager is just part of what the DOE itself calls an “all-of-the-above” energy strategy.

Noting that “tough choices” had to be made to keep taxpayer dollars concentrated on “areas that will yield the greatest benefit over time,” the department is proposing some dramatic shifts in its energy-efficiency and renewables focus. Proposed spending on biomass, geothermal energy and advanced manufacturing is up, budgets for hydrogen and fuel-cell technologies and for water power are down.

Among the targets the DOE’s Office of Energy Efficiency and Renewable Energy (EERE) is aiming for:

That last one is a heck of a tall order, considering the US got just 8 percent of its electricity from renewables as of 2009.