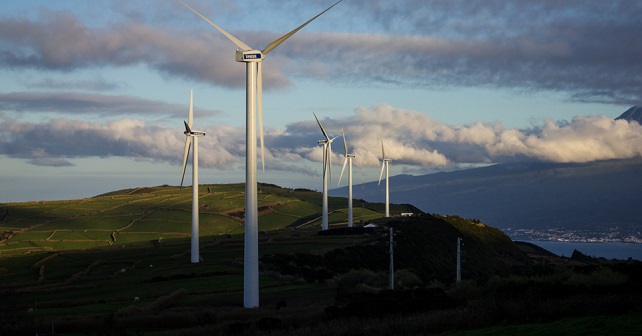 Smart Grid107
When it comes to renewable energy, too much of a good thing has in the past been a problem. Germany, for example, has brought...

When it comes to renewable energy, too much of a good thing has in the past been a problem.

Germany, for example, has brought online a massive capacity for wind and solar power. On especially windy or sunny days, though, it’s discovered that its new wealth of  renewable supplies can actually threaten to destabilize the grid.

However, that’s not only a problem other regions actually wish they had … it’s proved to be an opportunity to explore new technologies for stabilizing greener grids.

The tiny island of Faial, one of nine volcanic islands in the Azores about 900 miles west of Portugal, has become a testing ground for a new microgrid control system that does just that.

The island’s 15,000-or-so inhabitants had until recently depended on six oil-fired generators for local electricity. The generators, which can produce up to 17 megawatts of power, distribute electricity via a single regional network. In effect, that network operates as a self-contained microgrid.

The recent addition of five wind turbines — aimed at increasing energy supplies while minimizing environmental impacts on the tourism-dependent island — had the potential to complicate the existing electricity network. However, the network now has in place a microgrid control solution to prevent the problems that can come with sometimes-on, sometimes-off energy sources like wind.

The system from ABB will “facilitate the control and monitoring of all the wind turbines and oil-fired generators on the island,” said Claudio Facchin, head of ABB’s Power Systems division. “This is an important function as the intermittency associated with wind energy can cause frequency and voltage fluctuations that can destabilize the microgrid, and in extreme cases even lead to power disruptions and blackouts.”

Added through ABB’s recent acquisition of Powercorp, the control system is designed to calculate the most economical energy configurations, ensure a balance between energy supply and demand, integrate wind energy into the grid effectively and optimize the oil-fired generators to ensure the best possible performance for the entire power network. Combined with the new sources of wind power, the system is expected to help Faial reduce its carbon emissions and save up to 3.5 million liters of fuel every year.