waste18
Wastewater treatment plants could one day not only power themselves but be able to generate excess electricity for use by others. The answer, according... 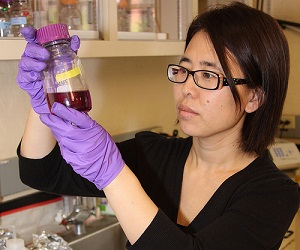 Wastewater treatment plants could one day not only power themselves but be able to generate excess electricity for use by others.

The answer, according to researchers at Oregon State University (OSU), lies with microbial fuel cells, in which bacteria oxidize organic matter in waste and in the process produce electrons that create an electrical current.

While scientists have known for decades that microbes could produce electricity, it’s only recently that the technology has advanced enough to make the process commercially viable. OSU researchers say the system they’ve developed results in the greatest power density yet achieved in microbial fuel cells: two kilowatts per cubic meter of liquid waste.

“If this technology works on a commercial scale the way we believe it will, the treatment of wastewater could be a huge energy producer, not a huge energy cost,” said OSU associate professor Hong Liu. “This could have an impact around the world, save a great deal of money, provide better water treatment and promote energy sustainability.”

Wastewater treatment — which typically uses air and bacteria to produce “activated sludge” — is currently an energy-intensive process, consuming about 3 percent of all electricity in the US and other developed countries.

OSU researchers say their technology works with any kind of organic waste … not just wastewater, but animal waste, grass straw and waste products from industries such as wine, beer and dairy processing. The process could be especially promising in developing nations where both sewage treatment and access to electricity are limited, they add.