livestock1
Our growing global appetite for meat might be having an even worse impact on greenhouse gas emissions that previously thought (pdf), according to a... 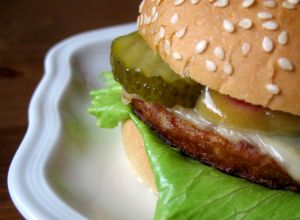 Our growing global appetite for meat might be having an even worse impact on greenhouse gas emissions that previously thought (pdf), according to a new report from World Watch.

The report, “Livestock and Climate Change,” finds that livestock might actually be responsible for 51 per cent of all human-caused greenhouse gas emissions, or some 32.6 billlion tonnes of carbon dioxide emissions per year.

A landmark 2006 study from the UN’s Food and Agriculture Organisation (FAO) previously estimated the livestock sector accounted for 18 per cent of the world’s greenhouse gas emissions.

“(W)e believe that the life cycle and supply chain of domesticated animals raised for food have been vastly underestimated as a source of GHGs (greenhouse gases), and in fact account for at least half of all human-caused GHGs,” write World Watch researchers Robert Goodland and Jeff Anhang. “If this argument is right, it implies that replacing livestock products with better alternatives would be the best strategy for reversing climate change.”

The World Watch report concludes that livestock-related emissions could be significantly reduced through a large-scale switch to meat and dairy analogs — products like soy burgers and soy chicken patties, for example — or the development of laboratory-cultured (“in vitro”) meat.

“Meat and dairy analog projects will not only slow climate change but also help ease the global food crisis, as it takes a
much smaller quantity of crops to produce any given number of calories in the form of an analog than a livestock product,” Goodland and Anhang write. “Analogs would also alleviate the global water crisis, as the huge amounts of water necessary for livestock production would be freed up.”