smart buildings12
It might still look its age — about a century old — on the outside, but Tulane University’s School of Architecture building is getting... 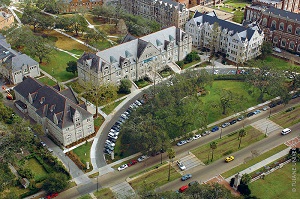 It might still look its age — about a century old — on the outside, but Tulane University’s School of Architecture building is getting a 21st-century makeover to its innards that will make it “smarter” and more energy efficient than ever before.

IBM is transforming Richardson Memorial Hall in New Orleans into what it calls a “smarter building living laboratory,” with new sensors and software for both monitoring and managing pretty much everything in the structure’s guts: heating, cooling, lighting and water. It’s part of IBM’s new Intelligent Building Management software offering, which uses advanced analytics and automation software to make sense of data about a building’s energy use, heating and cooling, computer use and more.

To highlight what its new software is capable of, IBM is also engaging in a research project with the Metropolitan Museum of Art in New York and putting a spotlight on its campus in Rochester, Minnesota, which it calls “one of the most energy-efficient IBM locations in the world.”

The Tulane makeover is especially noteworthy because the school, the largest private employer in the city of New Orleans, is still coming back from the $650 million in damage and losses it sustained after the levees failed following 2005’s Hurricane Katrina. Looking to rebuild in a more environmentally sustainable way, the university plans to work with IBM to give Richardson Memorial Hall “intelligence to monitor itself.”

“The work with IBM will help us advance the vision of the school — a vision that considers sustainability as a fundamental ethic guiding our evolution and setting the stage for progress for years to come,” said Kenneth Schwartz, dean of Tulane’s School of Architecture. “We are particularly inspired by the melding of environmental sustainability and technology innovation as we embark in a new era of smarter buildings.”

Architecture students at the university will get a first-hand opportunity to experiment on how air temperature, humidity, water temperature and other parameters affect the quality of comfort in the rooms as they aim to minimize the consumption of natural resources. Along with IBM, they’ll work in a cross-discipline team of facilities management, IT staff and partners such as Johnson Controls to create best practices that can be applied across campus and nationally.