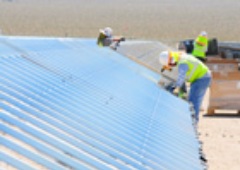 Photovoltaic solar module producer First Solar will provide the ground-mounted thin film panels for the project, and will also serve as the engineering, procurement and construction contractor.

The first 92 MW of solar panels at Copper Mountain Solar 2 are expected to be installed by January 2013, with the remaining 58 MW set for completion by 2015.  When fully developed, Copper Mountain Solar 2 should generate enough clean energy to meet the power needs of around 45,000 households. Under the terms of the contract, PG&E has the option to accelerate the commercial operation date of the second phase.

Copper Mountain Solar 2 represents one step in Sempra Generation’s goal of building 1,000 MW of new renewable capacity by 2015. Construction on the 1,100-acre solar plant is scheduled to begin in early 2012.

Sempra Generation and First Solar have worked together on two other large-scale solar projects in Nevada, including Copper Mountain Solar 1. The 48-MW installation was completed in late 2010 and is currently the largest photovoltaic solar power plant in the US.  PG&E is currently delivering the power produced at the plant to its customers.

The power supply contract between Sempra Generation and PG&E is subject to approval by the California Public Utilities Commission.