solar energy96
Construction of the US’s largest solar highway project continues to move forward in Oregon. The $10-million “Baldock Solar Highway” is being put up on... 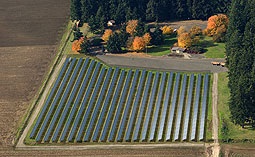 The $10-million “Baldock Solar Highway” is being put up on seven acres of land owned by the Oregon Department of Transportation (ODOT). Located behind a highway rest area, the project will be built and operated by Portland General Electric (PGE) and is expected to go online in January 2012.

The installation will include an interpretive display where the public can view the 1.75-megawatt (MW) solar array and learn about solar power and Oregon’s solar highway installations. The project will generate up to 1.97 million kilowatt-hours per year of renewable energy — equivalent to nearly 9 percent of ODOT’s needs in the PGE service area.

“With this project, we’re helping Oregonians understand how solar power benefits us all,” said Matt Garrett, director of the ODOT. “But we’re accomplishing more than just installing a solar array: we’re supporting local businesses, local workers and the state economy.”

The 6,994 photovoltaic panels are being produced by Oregon’s SolarWorld, with inverters provided by Oregon-based Advanced Energy. All other consulting, construction, analysis and other materials also will be provided by companies located in the state.

“These companies are helping diversify Oregon’s economy and build our state’s reputation as a solar manufacturing hub,” said Jim Piro, president and CEO of PGE.

The project also will help the utility company meet the state’s Renewable Energy Standard of providing 25 percent of its power from renewable energy sources by 2025.

The project is being funded by Bank of America, the Energy Trust of Oregon, PGE’s Clean Wind program and the state’s Business Energy Tax Credit program.

Ultimately, state officials plan to complete a Solar Highway on ODOT land with more than 17,000 solar panels that can eventually generate more than 6.4 million kilowatt-hours of electricity per year.