Is VW really the Darth Vader of automakers?

carbon emissions30
If Volkswagen is Darth Vader, Greenpeace International is hoping there’s some good in it yet. The organization has launched a campaign urging the car... 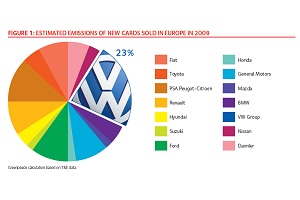 If Volkswagen is Darth Vader, Greenpeace International is hoping there’s some good in it yet. The organization has launched a campaign urging the car company to “turn away from the dark side” and stop opposing Europe’s greenhouse gas reduction targets.

Greenpeace’s VW Darkside website features a short video with children dressed as various characters from the “Star Wars” movies and a Death Star bearing the VW logo preparing to fire at, and presumably destroy, the Earth. It’s a parody of VW’s own Super Bowl ad for its Passat. (The video was not available on Greenpeace’s YouTube channel “due to a copyright claim by Lucasfilm Ltd.”) A report on the site further details why the organization considers VW the Dark Lord of European car-makers:

The car-maker can clearly do better, according to the environmental group, which points out that VW has developed several fuel-efficient prototypes … that never make it to market. And the ultra-efficient Lupo, unveiled in 1998, was offered “at such a high price that it simply didn’t sell,” according to Greenpeace.

On the other hand, VW has been involved in European studies into the viability of electric vehicles, and says it aims to launch “numerous plug-in hybrid cars on the market in the years 2013/2014.”