Smart Grid107
Allentown, Pennsylvania-based International Battery will supply its lithium-ion phosphate batteries for an energy storage system being developed by ABB for a Swedish utility. The... 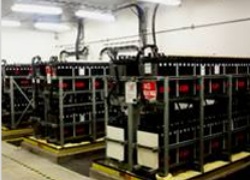 Allentown, Pennsylvania-based International Battery will supply its lithium-ion phosphate batteries for an energy storage system being developed by ABB for a Swedish utility.

The energy storage system will be part of the power distribution network for Falbygdens Energi AB, a subsidiary of Göteborg Energi AB.

ABB’s grid-tied distributed energy storage system will use International Battery’s large-format batteries to provide a power storage capacity of 87 kilowatt-hours. The system is designed to help Falbygdens Energi balance peak loads, enhance grid stability and make it easier to integrate renewable energy for current and future smart-grid applications. Set to be installed in late 2011, the system will be part of an existing substation in the city of Falköping enabling the storage of locally produced energy from wind turbines.

“We have a significant proportion of wind power connected to the grid in this region and expect this to grow further,” said Lars Ohlsson, CEO of Falbygdens Energi. “This innovative storage solution will make it possible to store wind energy during the night when demand is low and distribute it to users during the day, allowing us to use this clean renewable energy more efficiently and minimizing the need for fossil fuel-based electricity generation. As part of this pilot, we will also study the feasibility of the stored energy to be deployed as auxiliary power for charging of electrical vehicles.”

“(B)oth of these projects show how electric utilities can capture a multitude of value propositions by having the energy storage closer to the load and the end users,” said David McShane, International Battery’s executive vice president of business development and sales.