In land of photovoltaics, Europe is king 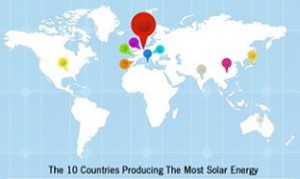 Germany has long led the way for solar PV. With 9.8 gigawatts (GW) of installed capacity in 2009, it added a further 6.5 GW last year, according to a recent report from the European Photovoltaic Industry Association (EPIA).

Spain saw huge increases when the feed-in tariff incentive policy was introduced in 2007. However, it has fallen back since the policy tariff was reduced in 2009.

Other European countries with rapid increases in the PV market include Italy and Czech Republic, both with over 1 GW installed capacity in 2010, giving Europe 70% of the global solar PV market.

Outside of Europe, the solar PV market is considerably smaller, with 3 GW installed capacity in 2010, mainly due to the traditional solid PV base of Japan, with over 1 GW installed. The US and China are also rapidly growing and both of these countries now produce a hefty amount of solar cells, due to companies such as First Solar and Suntech upgrading production facilities. 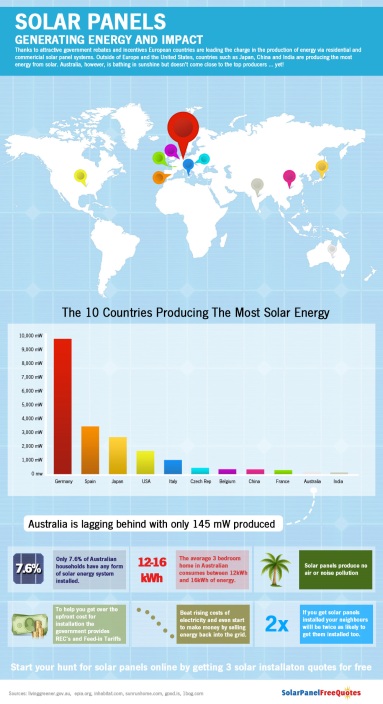 Final figures of global installed capacity in 2010 are yet to be finalised, however they are expected to reach 35 GW, a significant increase over the 2009 figure of 23 GW. The reasons for this rapid growth include reduced technological and manufacturing costs and numerous incentive policies, namely the feed-in tariffs being implemented in countries across Europe.

The cost to produce solar power has dropped by around 22% each time world production capacity has doubled, reaching an average generation cost of 15c€/kWh. This value is roughly one third of where it stood five years ago.

Ingmar Wilhelm, EPIA President said, “More than 70% of all new installations come from small and medium-sized systems. PV is in fact the people’s choice in renewable technologies as they can participate directly and contribute personally to a better environment.”

This raises an interesting point that can be related to the recent announcement that the UK government will be reviewing the feed-in tariff for larger-scale solar PV. Feed-in tariffs have been the main driver for the majority of the installed capacity in Europe and they have been allowed to cover larger-scale PV installations. This has not led to a dominance of installed capacity from larger-scale plants, with a generous 70% represented by small- and medium-scale PV. The should provide food for thought before officials rush in to prevent larger-scale PV installations … especially considering the UK has only installed 64 MW since April of last year, over a thousand times less than Germany.

At the end of 2010, cumulative installed capacity of PV in the EU amounted to more than 28 GW, with an energy output that equals the electricity consumption of around 10 million households in Europe. This, coupled with an energy payback time of one to three years for the typical PV system and an average module lifetime of greater than 25 years, illustrates that solar PV is a relatively long-term, viable, low-carbon energy source.

Considering the majority of solar PV developments have been in Europe, which doesn’t have the highest solar resource, there is still a huge potential for solar electricity in Sunbelt countries. The problem with these regions has been a lack of political support hampering growth, and the fact that a significant number of these countries have large resources of other sources of energy fuel. However, as costs continue to decrease, it’s only a matter of time before solar PV reaches grid parity in countries with a high solar resource, allowing market forces to dominate rather than government incentives.