How much oil is left?

oil26
Greenbang CEO Dan Ilett posed a simple question to our team over the weekend: “Guys — how much oil is left?” Here’s how our... 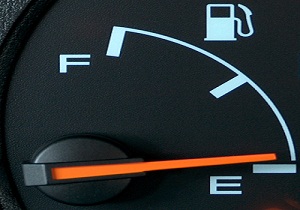 Greenbang CEO Dan Ilett posed a simple question to our team over the weekend:

Here’s how our subsequent discussion went:

“Global oil production reaches 96 mb/d (in 2035) … Crude oil output reaches a plateau of around 68-69 mb/d by 2020 — marginally below the all-time peak of about 70 mb/d reached in 2006, while production of natural gas liquids and unconventional oil grows strongly.

“According to the Oil and Gas Journal (2009), proven reserves of oil worldwide at the end of 2009 amounted to 1,354 billion barrels — a marginally higher volume than estimated a year earlier and the highest level ever attained. Reserves have more than doubled since 1980 and have increased by one-third over the last decade. Half of the increase since 2000 is due to Canadian oil sands reserves; most of the remainder is due to revisions in OPEC countries, particularly in Iran, Venezuela and Qatar. There are continuing question-marks over the estimates for some OPEC countries and their comparability with the figures for other countries. Notwithstanding these uncertainties, OPEC countries account for about 70 per cent of the world total reserves, with Saudi Arabia holding the largest volume.” 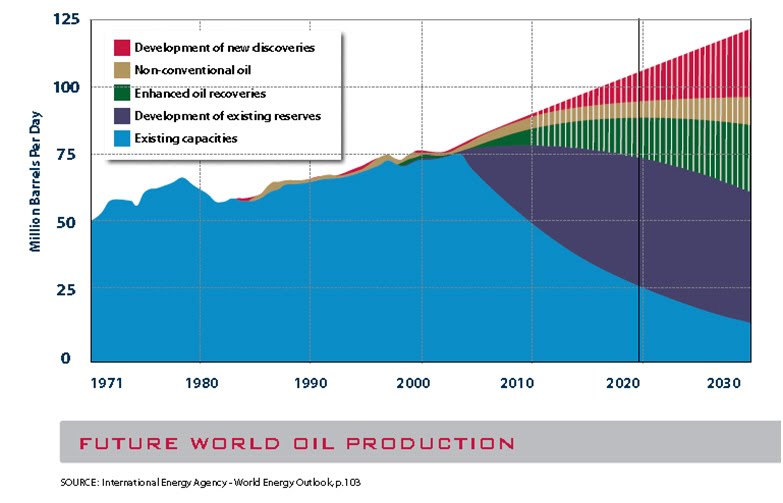 Saudi Arabia has long said it has enough for more than 60 years, but Matt Simmons’ book “Twilight in the Desert” raised some serious doubts about that. The problem is there’s no transparency: under Saudi leadership, OPEC stopped reporting field-by-field oil production data in 1982. So since then, most countries in OPEC just report countrywide production and countrywide proven reserves, and many proven reserves are hard to verify and go up year to year without any hard underlying evidence.

As Simmons noted in 2005, “The reserves mystery continues into the present in the form of the miraculously undiminishing resource base. For the past 17 years, Saudi Aramco’s reported proven reserves have stayed at approximately 260 billion barrels while more than 46 billion barrels of oil were produced from this base.” (his emphasis)

The International Energy Agency has historically been pretty optimistic in its outlooks, but changed its tune in the past year (see attached graph) to quietly acknowledge that conventional crude oil will probably soon peak (or has already peaked) and will then decline. However, it’s sticking to the belief there’ll be enough oil for some time yet thanks to the growth of unconventional oil like the Alberta tar sands. So its outlook doesn’t really project supply so much as it predicts demand, while assuming that supply will somehow keep up thanks to unconventional sources. 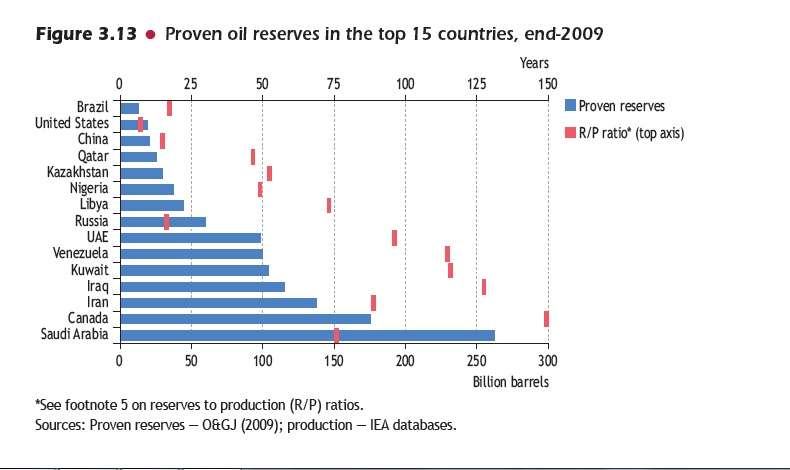 Spencer McGawley, Head of infrastructure practice: Cracking stuff: I cannot compete with this excellent answer (certainly as good as any I have read in the mainstream media) but will instead reframe the question:

The debate over peak oil is somewhat stymied and self defeating. You run into death by definition, since you start to stumble over what constitutes a “reserve” vs a “resource”. And just when you think you have that sorted, someone throws in the rather nefarious concepts of unconventional production.

Add in the politically charged issue of peak oil (listening to some people you almost get the impression that they WANT us to have passed peak oil …) and the whole debate gets caught up on the rocks, surrounded by sirens in the surf.

Therefore, I believe that the question we should be attempting to answer (or even ask) is at what point does oil cease to become viable to extract, and the concomitant question: at which point do alternatives become not only viable, but the preferred choice?

Look at deep sea drilling, or indeed tar sands extraction. Costs for this are high and we are not really sure that these reserves are actually exploitable as resources.  All we know is that the unit cost keeps increasing.

I feel that “peak oil” will cease to be a relevant question, and that oil will go the same way as coal: not run out, just not be viable to extract on the scale we have been.

So maybe the flippant answer to the question is, “Who cares? It doesn’t and won’t matter”!

Raphael Raggatt, Research analyst: I agree with you there Spencer, it’s too difficult to say how much oil is left as nobody really wants to say and the market is continually changing. With future technology advancements, more oil can come into play, and there are certainly plenty of regions left with oil.

The question is what alternatives are there, which are/will be cheap enough and able to meet the rising demand? I can’t see biodiesel being able to meet demand and electric cars on a large scale are still a couple of decades away yet. So for the meantime oil is here to stay.

Shirley: Here’s what Jeremy Leggett (founder and executive chairman of Solarcentury) had to say on the subject in a recent interview …

Dan: Thanks guys — so I guess we can conclude that there is some secrecy around this subject — which is a useful tool for controlling price — and that the alternative energy supplies will have a genuine growing economic demand for more than just a panicked switchover alone. New energy companies and energy efficiency companies would be wise to talk more about oil rather than shy away from it.

The fact BP and Shell have moved away from many renewable initiatives suggests they see oil supply for some time. Essentially, the supply of power is going to come from a distributed number of sources. The question is whether the applications that depend on oil can switch over effectively — and whether this can be done before the price of oil goes sky high.