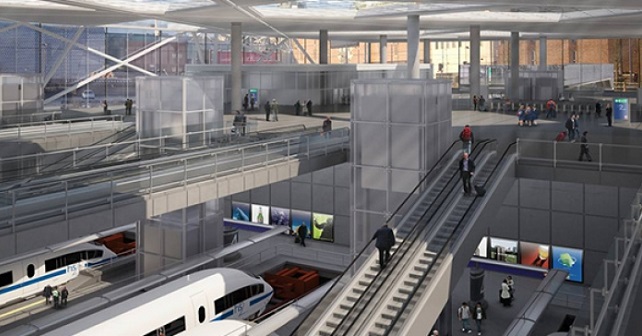 transport41
A UK government proposal for a new high-speed railway underestimates potential costs to the environment and to people, according to the London Assembly Environment...

A UK government proposal for a new high-speed railway underestimates potential costs to the environment and to people, according to the London Assembly Environment Committee.

High Speed Two, or HS2, would connect to the existing High Speed One line that runs from St. Pancras in London to the Channel Tunnel. It’s proposed to eventually extend as far north as Birmingham, Manchester, Sheffield, Leeds and beyond. The project would put two-thirds of Britain’s population within a two-hour train ride of London, according to the project’s planners.

The potential transport benefits, however, could come with “severe” impacts on neighborhoods, green spaces and the environment in London, warns a draft statement released today by the London Assembly Environment Committee.

“We’ve heard plenty about the supposed benefits of HS2 — but what about the human and environmental costs?” said committee chair Murad Qureshi. “What of the destruction of homes, city parks, ancient woodland and wildlife habitat? What about the 10 years of noise, pollution and disruption imposed on local people?”

Qureshi added, “Central London already has some of the worst air pollution in Europe — have the extra deaths and health effects of this added pollution not been considered at all? These costs need to be re-evaluated for the sums to add up to a realistic price tag for the construction of HS2.”

The committee statement concluded that, “The physical effects of the scheme will be severe for several London localities … Homes, businesses, community services and habitats are to be destroyed and damaged across some large areas.”

In addition to noting that the government’s proposed mitigation and compensation measures to date are “far from adequate,” the committee also recommended that the government and High Speed 2 Ltd. need to do far more to engage with local authorities, residents and other stakeholders before the plans go before Parliament.

“HS2 should get out the calculator and redo their sums,” Qureshi said. “Parliament needs to consider the overall cost to the health and wellbeing of Londoners when examining the environmental impact of HS2.”