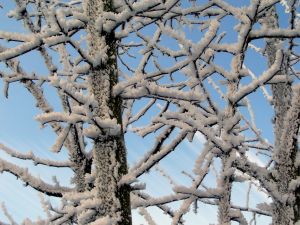 Now, new research suggests that some of the cold, snowy winters that parts of the world have seen lately aren’t due just to random variations, but could in fact be caused by climate change. Yes, global warming might be causing more cooling and snow.

Led by Judah L. Cohen of Atmospheric and Environmental Research, the new study explains the effect this way:

That line of reasoning would help explain why the Northern Hemisphere has seen a trend of more extreme winter weather — both bitter cold spells and heavy snows — since around 1988, the researchers say.

“(E)vidence suggests that summer and autumn warming trends are concurrent with increases in high-latitude moisture and an increase in Eurasian snow cover,” they write in an article published in Environmental Research Letters. And that, they continue, “dynamically induces large-scale wintertime cooling.”

There you go: warming causes cooling.