photosynthesis1
What can frogs teach us about solar power, biofuel production and carbon capture? More than you might think, say researchers at the University of... 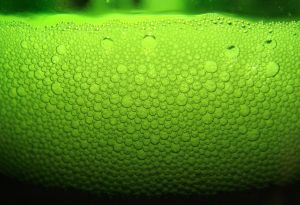 What can frogs teach us about solar power, biofuel production and carbon capture? More than you might think, say researchers at the University of Cincinnati.

Carlo Montemagno, dean of the college of engineering and applied science, has authored a study with research assistant professor David Wendell and student Jacob Todd describing how the foam nest of a semi-tropical frog provided the inspiration for a new material that could eventually help produce biofuels or pull carbon dioxide from the exhaust of coal-fired power plants.

The idea is to place an artificial photosynthetic material within a housing of long-lasting foam similar to that created by the Tungara frog. While the frog uses the foam to protect its eggs while they develop into tadpoles, the researchers’ foam is aimed at keeping in place the ingredients needed for artificial photosynthesis while still letting through ample light and air circulation.

“The advantage for our system compared to plants and algae is that all of the captured solar energy is converted to sugars, whereas these organisms must divert a great deal of energy to other functions to maintain life and reproduce,” said Wendell. “Our foam also uses no soil, so food production would not be interrupted, and it can be used in highly enriched carbon dioxide environments, like the exhaust from coal-burning power plants, unlike many natural photosynthetic systems.”

In plants, Wendell explained, too much carbon dioxide “shuts down photosynthesis.” With their bacteria-based strategy for artificial photosynthesis, though, that’s not the case.

The new technology, added Montemagno, “establishes an economical way of harnessing the physiology of living systems.” In fact, he said, it could provide a way to tap the sun’s energy to produce either food or fuel far more efficiently than other biosolar technologies.

Montemagno and his team will next turn focus their efforts on making their technology feasible for large-scale operations, such as for carbon capture at coal-fired power plants.