electricity25
Just as we plug into computers to communicate via Skype and email, electric fish communicate by plugging into special channels in their cells to... 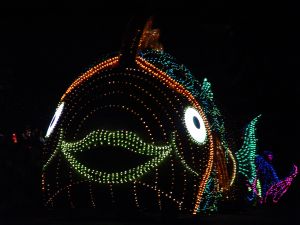 Just as we plug into computers to communicate via Skype and email, electric fish communicate by plugging into special channels in their cells to generate electrical impulses, according to new research from the University of Texas at Austin.

Found throughout Central and South America, electric fish generate electrical fields to navigate, fight and attract mates in murky streams and rivers. They do so at night, whilst also trying to avoid predators such as catfish that sense the electric fields.

As with the type of power we use, fish-generated electricity is costly to generate, so these fish use a sort-of “dimmer switch” to save energy by turning their electrical signals up and down, according to Harold Zakon, a professor of neurobiology.

Zakon, Michael Markham and Lynne McAnelly published their findings on the electric fish in this week’s issue of PLoS Biology.

The scientists also discovered the process is controlled by hormones, is maintained through a day-night circadian rhythm and can change rapidly during social encounters.

“For a vertebrate animal, this is the first account that brings the whole system together from the behaviour down to the rapid insertion of channels and in such an ecologically meaningful way,” said Markham, a research scientist in Zakon’s laboratory. “This is part of the animal’s everyday activity and it is being regulated very tightly by a low-level molecular change.”

Markham said the rapidity of the action is particularly stunning.

“This is happening within a matter of two to three minutes,” he said. “The machinery is there to make this dramatic remodeling of the cell, and it does so within minutes from the time that some sort of stimulus is introduced in the environment.”

The electric impulse can likely be produced so quickly because a reservoir of sodium channels is sitting in storage in the electric cells. When serotonin is released in the fish brain, it initiates the release of adrenocorticotropic hormone from the pituitary gland. This sets off the mechanism that puts more sodium channels in the membrane.

“It’s kind of like stepping on the gas in a car sitting there with its engine already running,” Zakon said.

When the fish are inactive, they remove the sodium channels from the cell membranes to reduce the intensity of the electric impulse.

The electrocytes in the fishes’ electric organ are made of modified muscle cells. This is significant because the vertebrate heart, which is also a muscle, can also add sodium channels to its cells to help it pump faster. The electric organ and heart are discharging constantly, and both organs are energetically costly.

“One big question for us in the future is, did this mechanism evolve once a long time ago or is this a case of convergent evolution, where the vertebrate heart evolved the ability to traffic these channels and then the electric organ evolved the same ability independently?” Zakon said.