8 minutes and 19 seconds that could change the world

solar energy96
The company name Eight19 doesn’t seem to suggest anything … until you hear the reason its founders called it that: “It takes 8 minutes... 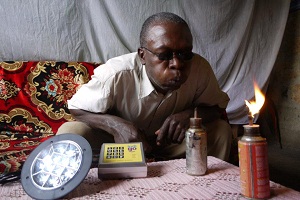 The company name Eight19 doesn’t seem to suggest anything … until you hear the reason its founders called it that:

“It takes 8 minutes and 19 seconds for light to reach the earth from the sun.”

Not just any kind of solar energy, though, but solar energy delivered with technology that’s lightweight, strong and low-cost enough to be affordable to the world’s poor. Considering that 1.6 billion people in the world today don’t have access to electricity — though many live in places where there’s lots of sunlight — that’s a technology with huge potential.

Eight19 hopes to make solar power even more affordable through its IndiGo pay-as-you go model. Under this model, electricity can be made available to people who don’t have enough money to pay for even the cheapest of solar panels. Instead, they can buy electricity in one-dollar increments whenever they need it, ensuring — for example — that they’ll always have access to a cellphone charge when they need to make a call.

That’s a big deal in places like Africa and the Middle East, where more than a half-billion people were using mobile phones as of 2010. Cellphones there have proven to be an invaluable lifeline, connecting people not only with family and friends, but with medical care, microcredit and many other critical services.

Eight19 last year began customer trials of its IndiGo service in Kenya, with plans to expand testing to Zambia, Malawi and India. It expects to begin rolling out IndiGo — whose flexible, printed-plastic solar cell can also be used to power lighting — on a commercial basis sometime this year.