geoengineering9
Seeding the upper atmosphere with particles could help curb climate change, but it could also have the unwanted effect of cutting solar energy production... 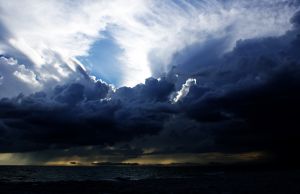 Seeding the upper atmosphere with particles could help curb climate change, but it could also have the unwanted effect of cutting solar energy production by as much as one-fifth, according to a new study from the US National Oceanic and Atmospheric Administration.

In the wake of as-yet unsuccessful efforts to reduce global greenhouse gas emissions, some scientists are advocating such geoengineering fixes as a last-ditch way to prevent catastrophic climate change. Research has already shown that natural injections of particulate matter into the stratosphere — as occurred during the 1991 volcanic eruption of Mount Pinatubo — can reduce incoming sunlight and lower global temperatures.

However, opponents of geoengineering warn such strategies could have many unintended, even dire side effects — and that’s what NOAA researchers have now reported.

Murphy said he found that, for every watt of sunlight reflected away from Earth by upper-level particles, another three watts of direct sunlight are converted to diffuse light. That’s bad for large concentrated solar-power plans, which need direct sunlight, not diffuse light, for maximum efficiency.

“Injecting particles into the stratosphere could have unintended consequences for one alternative energy source expected to play a role in the transition away from fossil fuels,” said Daniel Murphy, a scientist at NOAA’s Earth System Research Laboratory in Boulder, Colorado. “The sensitivity of concentrating solar systems to stratospheric particles may seem surprising. But because these systems use only direct sunlight, increasing stratospheric particles has a disproportionately large effect on them.”