global warming127
Don’t say we weren’t warned. Scientists have long cautioned about the potential danger of feedback loops in the planet’s delicately balanced climate system, and... 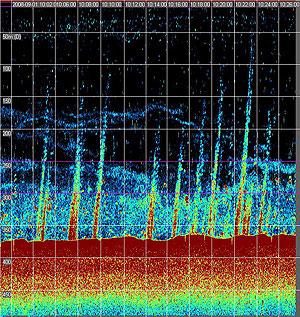 Scientists have long cautioned about the potential danger of feedback loops in the planet’s delicately balanced climate system, and are now finding evidence that just such effects are occurring as the world warms.

Researchers at the National Oceanography Centre Southampton — working in collaboration with scientists from the University of Birmingham, Royal Holloway London and IFM-Geomar in Germany — have found that a warming Arctic current over the past 30 years has triggered the release of methane, a potent greenhouse gas, from methane hydrates stored in sediment below the seabed.

The research team has found that more than 250 plumes of bubbles of methane gas are rising from the seabed of the West Spitsbergen continental margin in the Arctic, in a depth range of 150 to 400 metres.

Methane released from gas hydrates in submarine sediments has been identified in the past as an agent of climate change. The likelihood of methane being released in this way has been widely predicted.

The data were collected from the royal research ship RRS James Clark Ross, as part of the Natural Environment Research Council’s International Polar Year Initiative. The bubble plumes were detected using sonar and then sampled with a water-bottle sampling system over a range of depths.

The results indicate that the warming of the northward-flowing West Spitsbergen current by 1° over the last thirty years has caused the release of methane by breaking down methane hydrates in the sediment beneath the seabed.

“Our survey was designed to work out how much methane might be released by future ocean warming; we did not expect to discover such strong evidence that this process has already started,” said Tim Minshull, head of the University of Southampton’s School of Ocean and Earth Science based at the National Oceanography Centre.

This is the first time that such behaviour in response to climate change has been observed in the modern period.

“If this process becomes widespread along Arctic continental margins, tens of megatonnes of methane per year — equivalent to 5 – 10 per cent of the total amount released globally by natural sources, could be released into the ocean,” said Graham Westbrook, a professor of geophysics at the University of Birmingham.

The research team is carrying out further investigations of the plumes; in particular, they are keen to observe the behaviour of these gas seeps over time.

The discovery is worrisome in light of a theory called the clathrate gun hypothesis (clathrates are another name for methane hydrates), which holds that sudden releases of massive amounts of methane from below the sea bed have been responsible for rapid and dramatic changes in the environment and — possibly — mass extinctions.