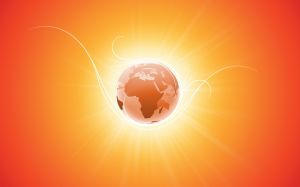 Items that qualify for listing in each week’s index include new climate data published in peer-reviewed academic journals and extreme weather incidents or other natural events that are likely directly linked to the global warming trend.

20 September: An international team of researchers has found that 85 per cent of the world’s 33 large river delta areas have experienced severe flooding over the past decade as a result of sediment compaction from the removal of oil, gas and water; the trapping of sediment in reservoirs upstream; floodplain engineering; and rising global sea levels caused by climate change. Based on current projections for future sea level rise, the team estimates that delta areas vulnerable to flooding could increase by another 50 per cent this century.

23 September: Glaciers along the Antarctic coastline and across all latitudes in Greenland are thinning rapidly, according to the most comprehensive imaging yet created using satellite lasers. The findings are an important step forward in the quest to make more accurate predictions for future sea level rise as the climate changes, according to researchers from the British Antarctic Survey and the University of Bristol.

23 September: The US Southeast experiences record high rainfall and flooding, breaking nine new flood-stage records in Georgia alone, according to the Atlanta Journal-Constitution. The extreme weather is blamed for the loss of at least nine lives and damage of at least $250 million (view pictures here).

24 September: The pace and scale of climate change may now be outstripping even the most sobering predictions of the last report of the Intergovernmental Panel of Climate Change (IPCC), according to a report from the UN Environmental Programme (UNEP). The analysis of the very latest, peer-reviewed science indicates that many predictions at the upper end of the IPCC’s forecasts are becoming ever more likely.

24 September: At least 36 million people were displaced by sudden-onset natural disasters in 2008, including over 20 million displaced by climate-related, rapid-onset disasters, according to a new report from the UN Office for the Coordination of Humanitarian Affairs (OCHA) and the Geneva-based Internal Displacement Monitoring Centre (IDMC). According to the study, climate changes are already increasing the frequency and intensity of natural hazards, and the numbers of natural disasters reported and people affected are rising.

25 September: Unusually high temperatures in the Arctic and heavy rains in the tropics likely drove a global increase in atmospheric methane in 2007 and 2008 after a decade of near-zero growth, according to a new study. Methane is the second most abundant greenhouse gas after carbon dioxide, albeit a distant second.

Other news reports from the past week that don’t meet the criteria for the Climate Change Index but are nonetheless notable include:

23 September: A wall of dust stretched from northern Queensland to the southern tip of eastern Australia that was so thick, the land beneath was not visible by satellite. The storm, the worst in 70 years, led to canceled or delayed flights, traffic problems, and health issues, reported the Australian Broadcasting Corporation (ABC) News. The concentration of particles in the air reached 15,000 micrograms per cubic meter in New South Wales during the storm, said ABC News. A normal day sees a particle concentration 10-20 micrograms per cubic meter.

27 September: In a paper published in the September issue of Nature Geoscience, an international team of scientists argues that current international strategies to mitigate man-made carbon emissions and address climate change have overlooked a critical player: inland waters. Streams, rivers, lakes, reservoirs, and wetlands play an important role in the carbon cycle that is unaccounted for in conventional carbon cycling models, the researchers say.