aviation12
The Royal Society of Chemistry (RSC) has published a new paper exploring the “miracle” chemical breakthrough that gave Britain’s Spitfire and Hurricane aircraft the... 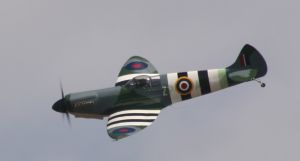 The Royal Society of Chemistry (RSC) has published a new paper exploring the “miracle” chemical breakthrough that gave Britain’s Spitfire and Hurricane aircraft the edge over German fighters during the Second World War.

The revolutionary aviation fuel was supplied to the RAF by an American firm — the Sun Oil Company — using a process invented by Eugene Houdry, a Frenchman.

“His miraculous catalyst turned nearly worthless sludge into precious high-octane gasoline and helped the Allies to win World War II,” writes American science writer Tim Palucka in the introduction to the RSC paper. “That process would make a crucial difference in mid-1940 when the Royal Air Force started filling its Spitfires and Hurricanes with the 100-octane gasoline imported from the United States instead of the 87-octane gasoline it had formerly used.”

The RSC is inviting experts and the public to challenge the new claim and if it remains intact, the society will send the report to aviation and military historians to mark the newly-discovered contribution of chemists to victory in one of the key battles.

Houdry developed one of the earliest catalysts to convert useless crude oil into high octane fuel. He revealed the “cracking” process at a Chicago chemicals conference in 1938. The 100-octane fuel that resulted from the Houdry Process increased the Spitfire’s speed by 25 mph at sea level  by 34 mph at 10,000 feet.

This extra speed gave the British fighters in the summer of 1940 the edge over the Luftwaffe above the English Channel and in the skies of London and south-east England. With the balance tipped towards the British, the German invasion was abandoned and Hitler turned eastwards, allowing the UK armed forces time to regroup and to revive.

“Luftwaffe pilots couldn’t believe they were facing the same planes they had fought successfully over France a few months before,” writes Palucka. “The planes were the same but the fuel wasn’t.”