A new way to charge electric cars: Fill ‘er up with electrolytes

electric cars62
Imagine being able to recharge your electric car battery as easily as filling the tank in a petrol-driven car. Researchers in Germany think they’ve... 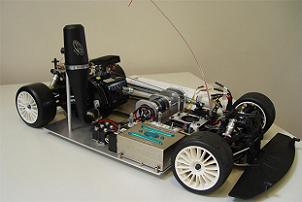 Imagine being able to recharge your electric car battery as easily as filling the tank in a petrol-driven car. Researchers in Germany think they’ve found the answer in a new type of redox flow battery.

Using such a battery, motorists with electric cars could simply go to the gas station and exchange the discharged electrolyte fluid with recharged fluid.

Energy storage limitations are one of the greatest challenges in the effort to switch to electric cars. Lithium-ion batteries, for example, take hours to charge – time that an automobile driver doesn’t have when on the road. A better alternative might be redox flow batteries, according to researchers from Germany’s Fraunhofer Institute for Chemical Technology ICT.

The principle of redox flow batteries is not new: two fluid electrolytes containing metal ions flow through porous graphite felt electrodes, separated by a membrane that allows protons to pass through it. During this exchange of charge a current flows over the electrodes, which can be used by a battery-powered device.

Until now, however, redox flow batteries have had the disadvantage of storing significantly less energy than lithium-ion batteries. Vehicles using such batteries would only be able to cover about a quarter of the normal distance — around 25 kilometres — which means the driver would have to recharge the batteries four times as often.

“We can now increase the mileage four or fivefold, to approximately that of lithium-ion batteries,” Noack said.

The researchers have already produced the prototype of a cell. Now they must assemble several cells into a battery and optimise them, a project they’re now working on with colleagues from the University of Applied Sciences, Ostphalia. They are testing electric drives and energy storage units on model vehicles that are only a tenth of the size of normal vehicles.

The research team has already built a traditional redox flow battery into a model vehicle. A vehicle on a scale of 1:5 can be seen in action on a test rig set up at the eCarTech in Munich this week from Tuesday through Thursday. In the coming year, the researchers also want to integrate the new battery, with four times greater mileage, into a model vehicle.